A suburban father buys a black duckling for his daughter Agnes, who dotes on the duck. The duck quickly grows up to become Daffy Duck, whose loud and obnoxious behavior is driving the man to distraction, but Agnes defends her pet at every turn.

The father buys a white duckling for Agnes, who changes her focus totally to the new duckling. The father comes at Daffy with murder in his eyes, and chases Daffy around the house. Daffy hides in the room where the duckling is being kept. He wants to kill the duckling, but has a pang of conscience and decides to make the duckling grow to adult size, and then kill him. Daffy pours vitamins down the duckling's throat. With a "bay-woop", the duckling instantly grows into adulthood and turns out to be a shapely female duck. Daffy shrugs his shoulders.

The father walks down the stairs, laughing to himself, thinking he has chased Daffy out of the house. He is stunned to see Daffy; the female; and several newly-born ducklings bouncing around the dinner table, as Daffy is launching into one of his raucous stories. 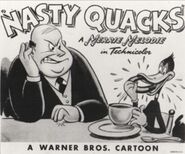