New Cadet is a character in the Duck Dodgers TV series. She was voiced by Kelly Ripa.

She stalks men to get them to love her. Her only appearance was in the episode "The New Cadet". In that episode, she kidnaps The Cadet to get close to Duck Dodgers.

She has amazing combat abilities, shown in the episode when she takes over a whole martian tank. After Duck Dodgers didn't want to have a relationship, she says Dodgers is like other men and then tries to kill him. 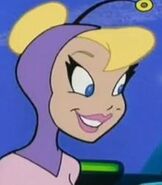