Nickelodeon began airing Looney Tunes on Nickelodeon on 12 September 1988.[1] Initially, Nickelodeon's selection of Looney Tunes was made mostly of black-and-white pre-1943 cartoons and cartoon shorts of the post-1960 time period, plus colorized versions of the Porky Pig cartoons from the 1930s and early 1940s. Nick did have access to some cartoons released between 1948 and 1960, though, and thus aired them very often.

Until 1993, each installment tended to feature three or four cartoons, of which the second, usually black-and-white, starred Bosko, Buddy, or Porky Pig. During the first few years of Looney Tunes on Nickelodeon, the opening sequence with the Warner Bros. logo and the closing "That's all, Folks!" cards were not included on the cartoons, but the opening credits to the cartoon shorts were shown. The ending frame of each cartoon was often shrunk into a ball which bounced into a picture of a group of characters standing in front of the Looney Tunes on Nickelodeon logo. The one exception to this was "Guided Muscle", in which, instead of the bouncing-ball ending, Wile E. Coyote dragged the Looney Tunes on Nickelodeon card across the screen at the end, whereas at the finish of the original cartoon, he dragged across the "That's All, Folks!" card. Each show would end with a single closing card. Unlike Cartoon Network or Boomerang, which are now owned by Time Warner, Nickelodeon did not have the rights to use the opening, ending, and the "That's All Folks!" titles on every short at the time.

In addition to the version that aired during the day and early evening on Nick, the channel also packaged a version of the Looney Tunes program for its Nick@Nite block. The opening to this version showed clips from the cartoons of characters preparing for, or in, bed. These installments were also a half-hour long, and also usually included a black-and-white cartoon.

In September 1992, some shuffling of cartoons between broadcasters allowed Nick access to an additional number of Looney Tunes shorts. A new theme song was made, and this time the cartoons now shown with their full openings and closings intact, much like Cartoon Network and Boomerang. Unlike Cartoon Network and Boomerang, sometimes thick colored borders are added to the original openings and closing titles of the cartoons.

The black-and-white cartoons were dropped from the shows; one promotional spot lampshaded this by stating that Nick now had "More Bugs, more Daffy, more Tweety, and no Bosko". They dropped the show from Nick @ Nite, but on the plus side, the poorly-redrawn colorized Porky Pig cartoons were replaced with new, computer-colorized versions from the 1990s which were far superior, although Nick continued to air redrawn versions of "Porky's Midnight Matinee", "Rover's Rival", and "Slap Happy Pappy". For the whole 1994-95 season, Nick had the most variety of shorts in their Looney Tunes package; the following year, it dropped a small bit when The WB Network assumed possession of several of the cartoons for That's Warner Bros.! on Kids' WB!

From 1995 to the end of 1997, Nickelodeon's batch of cartoons remained constant. "Wet Hare", "Mad as a Mars Hare", and "D' Fightin' Ones", having been ABC staples since 1985, transferred to Nick in 1994. However, at the start of 1998, Nickelodeon and ABC swapped several cartoons. "The Fair Haired Hare" and "Hoppy Daze" were finally relinquished by ABC to air uncut on Nick, while ABC reacquired "Mad as a Mars Hare", "D' Fightin' Ones", "Rabbit Rampage", "Ali Baba Bunny", "Dr. Jerkyl's Hide", "What's Opera, Doc?", "Hare Brush", and more. A number of initially black-and-white Porky Pig cartoons commenced transmission on Nick in computer-colorized format in 1998.

In early 1999, it was announced that Nick's package of Warner Bros. cartoons would soon be relocating to Cartoon Network. The final installment of Looney Tunes on Nickelodeon ran on September 11, 1999, containing "The Cats Bah", "Porky in Wackyland", "The Daffy Duckaroo", "To Beep or Not to Beep", "Tree for Two", and "Of Rice and Hen".[2][3][4]

Looney Tunes on Nickelodeon, both the original Nick at Nite version and the later daytime version, edited several cartoons for content when shown.

In contrast to network television, a lot of the slapstick violence, suggestive humor as with the Pepe Le Pew cartoons, and depictions of Mexican/Latino stereotypes as with the Speedy Gonzales cartoons that would normally be cut or banned elsewhere were left intact here. However, the channel did do their share of edits:

Other cuts shown on the network were time cuts to make room for more commercials as with "Porky's Party" and "Bosko's Knight-Mare", some gross and rude humor, as with the father pig vomiting up a corncob in "The Booze Hangs High" or the younger dog calling Porky's older dog a "washed-up antique" in "Rover's Rival", and cuts to cover up the shoddy work done on their redrawn colorized versions as in "The Daffy Doc" and "Ali-Baba Bound".

Most of the cuts made weren't as abrupt or sloppily done as those made on network television or even first-run syndication, but there were times where the came off as obvious even to the most naive viewer. Nickelodeon also had the broadcasting rights to air some of the more controversial shorts that aren't the Censored Eleven, such as "Goin' to Heaven on a Mule", "Tokio Jokio", both the 1938 and 1969 versions of "Injun Trouble", "Confusions of a Nutzy Spy", "Robinson Crusoe Jr.", and "The Ducktators", but these shorts never aired on the network due to Nickelodeon's Standards and Practices vetoing it.

Following its departure from Fox Kids in 1995, Tiny Toon Adventures aired in reruns on Nickelodeon from 1995 to 1999. During this time, the episodes were always book-ended with animated bumpers depicting a group of kids going to a theater to watch the show right before it began, and then cheering after it was finished. Notably, it was on Nickelodeon that they were able to air the Halloween episode "Toons From the Crypt", which Fox had refused to run. However, most online fan-made episode guides were never updated to make note of this.

Tiny Toons eventually left Nickelodeon in September 1999, when its contract to run on the network expired, and the reruns were sent to Cartoon Network from 1999 to 2001. In September 2002, the Tiny Toons reruns returned to Nickelodeon and its sister channel Nicktoons for another two years.

Unlike Animaniacs, which shortened the intro, replaced them coming out of the WB shield with the Nickelodeon logo and changed the variable line to one of their own, and Pinky and the Brain, which was ridden with insertions of the Nickelodeon logo, the show's intro was unedited, but the shot of the WB Shield zooming out at the beginning of the intro sequence was replaced with a fade from black to the Tiny Toons logo.

Reruns of Pinky and the Brain and its spin-off began airing on Nickelodeon on September 4, 2000, and its TV rights would remain under Nick until 2005.

The episodes themselves were generally unedited, but Nickelodeon literally wrote their name all over the intro sequence by having their logo replace the original colors of a background or foreground object. For example, Brain's mathematical equation during the line "One is a genius, the other's insane", was changed to a drawing of the Nickelodeon logo. Also, at the very end of the intro sequence, a lightning bolt would strike the sign on the Acme Labs building and change it to the Nickelodeon logo. Nick had never done this with any other show they had not created, and this caused quite a bit of controversy with the show's fans.

Appropriately following Pinky and the Brain joining the channel, Animaniacs reruns came to Nickelodeon on September 3, 2001, and aired on the channel for the next two years.

But in what proved to be even more controversial than with Pinky and the Brain, was Animaniacs overall has been heavily butchered by the network. Nick not only wrote their name on the intro (the zoom-in to the WB Water Tower at the start was replaced by the logo breaking through a screen with the Nickelodeon logo), but they also shortened down the song and replaced all the variable lines with a custom-made one of their own that did not even rhyme. Additionally, the first half of the lyrics were set to clips that came later in the song and pitched up two semitones to match the final verse. The shortened lyrics to the theme song were as follows:

The fans were outraged, so much that some of them refused to watch the show on the channel, on suspicion that Nick was even editing the episodes to change all mentions of Warner Brothers to mentions of Nickelodeon. The episodes were indeed edited on the channel, but instead it was some scenes being cut out for timing purposes (though in some cases, such as "Cutie and the Beast", it would ruin a joke).

On 11 February 2020, Nickelodeon aired the movie Space Jam, making it the first time that anything Looney Tunes-related aired on the network since 2005.[5] 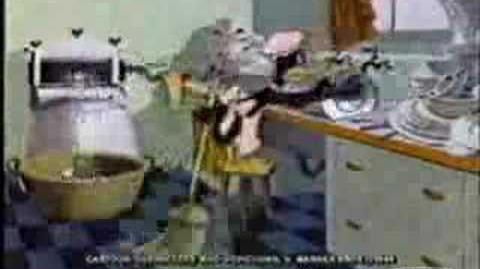 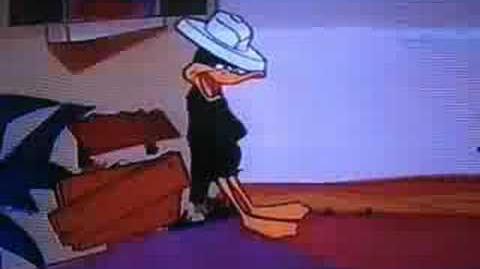 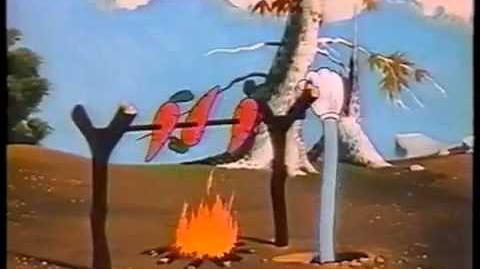 Nickelodeon Looney Tunes Up Next Bumper (1991) 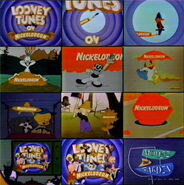 Guided Muscle (1955) Green Borders were added to the original closing instead of Wile E. Coyote dragging the Looney Tunes on Nickelodeon/Nick at Nite card with no borders. Guided Muscle was included in Nick's Looney Tunes Packaging from 1990-1992, 1994-1995 and 1995-1997. This green border aired in May 1995 from the 1955 short "Guided Muscle"