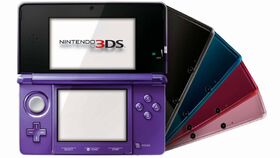 The 2DS can play all 3DS games, but in 2-dimension only, and is cheaper than the 3DS. The New Nintendo 3DS and 2DS systems have faster processors and better circular pads than the original and can play all 3DS games. All 3DS and 2DS game data is saved onto the cartridge, not the system. The 3DS and 2DS also have cameras to take screenshots around the player if they wish, unlike the DS and DS Lite. However, the DSi systems did have cameras. The 3DS and 2DS also are compatible with Nintendo's Virtual Console service, which allows players to download retro titles from the Nintendo Entertainment System, Game Boy, Super Nintendo Entertainment System, and Nintendo 64 for a small fee to play on their 3DS or 2DS. The Nintendo 3DS and 2DS, along with Nintendo Wii U and Nintendo Switch, have an online shop called Nintendo eShop, where players can purchase digital copies of games and in-game purchases.

All 3DS and 2DS models are backwards compatible with all Nintendo DS games that do not require the Game Boy Advance slot. In addition, the 3DS had access to the Nintendo DS Wi-Fi connection when a DS games was played. The DS Wi-Fi service ended in 2014. Only local play on DS games is supported for the DS and the 3DS/2DS. This does not affect the Nintendo 3DS/Wii U online service, Nintendo Network, which is still running as of 2019 and allows players to play Nintendo 3DS/Wii U games online at no charge.

Both screens of the 3DS are encompassed within a clamshell design similar to the Game Boy Advance SP and the Nintendo DS Lite and DSi models. The Nintendo 3DS also features the ability for multiple 3DS consoles to directly interact with each other over local play within a short range without the need to connect to an existing wireless network. Players on the Nintendo 3DS and 2DS systems can interact online through Nintendo Network, the current supported internet service for Nintendo 3DS and Wii U, free of charge.

Looney games for this system include:

Retrieved from "https://looneytunes.fandom.com/wiki/Nintendo_3DS_and_2DS?oldid=187416"
Community content is available under CC-BY-SA unless otherwise noted.