Nothing but the Tooth

Nothing but the Tooth

Nothing but the Tooth is a 1948 Merrie Melodies short directed by Arthur Davis.

Porky Pig travels by horse-pulled, covered wagon to California to join in the 1848 Gold Rush. He is ambushed by a diminutive, large-nosed, nasal-voiced, ever-so-polite Mohican with glasses, who wants to scalp the westbound pig. Porky manages to elude the little Indian by ducking at appropriate times, donning a metal helmet, speedily horse-riding and canoeing. The Indian becomes caught in a salmon net and canned in a factory. Porky arrives in California, to find the only gold that he can extract from a mine is the golden tooth belonging to the Indian. 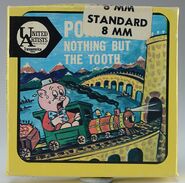 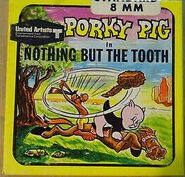 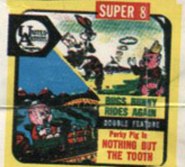 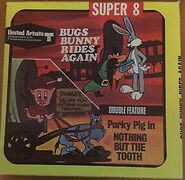 (1986) VHS
Viddy-Oh! For Kids Cartoon Festivals: The Best of Bugs Bunny and Friends

(1986) VHS
Viddy-Oh! For Kids Cartoon Festivals: Porky Pig Cartoon Festival Featuring "Nothing but the Tooth"
(damaged a.a.p. print with blue logo, 1947-49 Blue Ribbon Color Rings from "Inki and the Lion", light blue borders, 1939-40 version of "Merrily We Roll Along" plays, then changes to another print that says "Nothing but the Tooth". This is a MGM/UA print and probably was hacked off by United Artists in the 1980s.)