Now Hear This is a 1963 Looney Tunes short directed by Chuck Jones and Maurice Noble.

The Devil loses one of his horns. It is found by an Englishman who uses it as a hearing horn. The Englishman then sees his old horn as busted up and droopy and blows a raspberry at it before throwing it away. As he uses the Devil's horn, he begins hearing and seeing strange and amplified sounds and figures, with one frequent figure being a diminutive, mischievous man dressed in pink. After a series of painful misfortunes caused by the horn, being bruised into casts as a result, he throws out the Devil's horn and gets his original one back from the trash. The Devil finds his horn again and screws it back on. The small man in pink reappears to provide the moral that "The other fellow's trumpet always looks greener," before flipping the sign to reveal "The End". 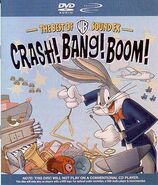