Of Thee I Sting is a 1946 Looney Tunes short directed by Friz Freleng.

The title is a pun on the Broadway musical Of Thee I Sing.

In Target for Tonight-style, a narrator describes a mosquito attack upon a man in his cabin who has safeguarded his porch against insect invasion. 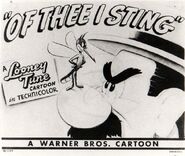 Retrieved from "https://looneytunes.fandom.com/wiki/Of_Thee_I_Sting?oldid=237400"
Community content is available under CC-BY-SA unless otherwise noted.