Porky Pig is a child forced to learn the Pledge of Allegiance. He becomes quickly bored and falls asleep. In his dream, Uncle Sam comes to life and teaches Porky about history from Colonial America through the American Revolutionary War to the expansion of the American Old West, briefly alluding to Abraham Lincoln. Upon awakening, Porky snaps into a salute and recites the pledge as the Flag of the United States waves overhead and the words "The End" pan over the waving flag. 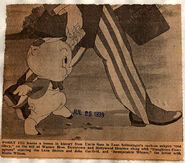 A clipping from a Los Angeles newspaper publicizing the showing of Old Glory – and indicating what features it played with!

The title card of the first Blue Ribbon re-issue.