One Froggy Evening is a 1955 Merrie Melodies short directed by Chuck Jones.

A demolition worker finds Michigan J. Frog in a box in the cornerstone of a building and sees him singing. Hoping for fame and fortune, he takes the frog to see a talent agent. However, Michigan won't sing in front of the agent. He then sees a theater for rent, takes out his life savings, and has Michigan sing on stage. Michigan keeps singing until the curtain opens, to which the audience boos when Michigan won't sing in front of them. Michigan continues singing when nobody except its owner is around. As for the man, he is soon penniless and living on a park bench during a cold winter day. Michigan keeps performing for the man, and his singing is so loud it attracts the attention of a policeman. When the cop demands to know what was all the noise, the man points to Michigan doing it. When the frog makes a feeble croak for the policeman, the cop arrests the man for disturbing the peace, whereupon he is remanded to a psychiatric hospital for attempting to blame it on the frog. Sometime later, the man is released. Broken by his feeble attempts at fame and fortune, the man regains his composure by putting the frog back in the box. The man passes by the construction site of the "Tregoweth Brown 40-Story Building", and entombs the frog by placing the box inside the new cornerstone which is soon sealed.

In 2056, the building is taken apart by a futuristic demolition worker who finds Michigan's box and hears the frog sing "Hello, My Baby". The 21st century construction worker starts thinking to himself about big bucks, and sneaks off with the frog's box. 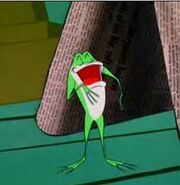 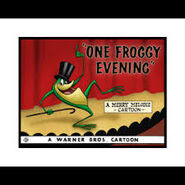