One Meat Brawl is a 1947 Merrie Melodies short directed by Robert McKimson.

The title is a parody of the 1944 song "One Meatball", even though the plot has nothing to do with meatballs.

In the forest, a burrow is inhabited by a groundhog named Grover. Today is Groundhog's Day, and Grover Groundhog is ready to make his appearance. He turns on the radio, positions his lamp and sings his song. Then his shadow does its acrobatics act and Grover applauds. That when the radio announcer talks about Groundhog's Day and everybody gathering around for the appearance of Grover Groundhog. Grover steps out, happy to meet his "fans", only to find that his "fans" are really hunters, and the "cameras" are really rifles. This was around the time of meat shortage and high priced meats even though most wartime rationing on food has ended following the end of World War II; Grover even exclaims that this meat shortage is tough on the animals.

Porky Pig and his dog Mandrake have different plans for Grover. Porky wants Grover to complete his stuffed animal collection. Mandrake wastes no time in finding Grover even after a tiny mishap of bringing back a shoe. Grover scares Mandrake, Mandrake identifies him and Grover did a little Take or Leave It act. The chase is on but before Mandrake could catch him, Grover shames the dog and tells him a sad story, which the groundhog admits to the audience "Dogs are suckers for sob stories".

Porky shows up but before he could shoot Grover, Mandrake stops him and growls at him. Grover even whacks Porky on the knees with a plank. Porky quickly snaps him out of it and puts earmuffs on Mandrake so that he wouldn't let Grover trick him again. But Grover is one step ahead of them and wires the earmuffs to a microphone and continues to tell the sad story. Porky again relents but not before Grover escapes. Now Porky starts to shame Mandrake and Mandrake does a suicide attempt by pointing a gun against his head. Turns out, that gun is a harmless water pistol. Porky then gives Mandrake one more chance and send him off again.

Grover sees Mandrake coming and sets up a "Free Food" display, with him and a bone as the choices. It took Mandrake a few seconds to make a choice but he eventually makes it. Porky shows up and gets knocked out hearing Mandrake eating something. Porky realizes that Mandrake ate the groundhog, shames him again and starts to tell that same sad story with Grover whispering it to Porky's ear. But Mandrake spots the truth and shows Porky the groundhog. Grover escapes again, but not before saying "I'm only 3½ years old." Porky corners Grover in a pail, but somehow the bullets missed him entirely. Grover then runs back to his home and his two advisories are right behind him although Mandrake briefly blocks Porky's entrance but Porky pushes him to the side, goes in and Mandrake follows.

Then a big fight ensues, but it is really their shadows doing the fighting. Porky explains that shadow boxing is to make sure nobody gets hurt. 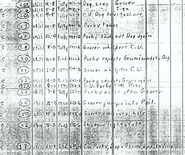