An island boy plays the titular tune on his ukulele while his girlfriend dances the hula in her grass skirt. Monkeys, birds, and even a palm tree join in the dancing. The boy hops on a rock, which is really an alligator. It flips him up in the air and swallows his ukulele. He tricks the gator and reaches in to recover it. After that, the two decide to go for a boat ride, during which the ukulele is knocked overboard. The boy goes into the sea after it. He finds a grand piano on the seafloor and plays a tune for the fish. Then a large octopus plays them another song. A big hungry fish chases the boy. He finds a piece of pipe, blows a big bubble, gets inside it and rides it up to the surface. The bubble continues, carrying him high up in the air until a bird pops it. The girl hops on a flying pelican and steers it underneath him to catch him in its bill. The pelican flies toward the camera and its round black body acts like a reverse iris.

(1992) LaserDisc
The Golden Age of Looney Tunes, Vol. 3, Side 1: Harman-Ising
Add a photo to this gallery 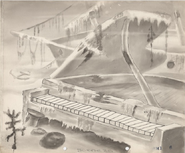 Production background
Add a photo to this gallery

Retrieved from "https://looneytunes.fandom.com/wiki/Pagan_Moon?oldid=264933"
Community content is available under CC-BY-SA unless otherwise noted.