Paying the Piper is a 1949 Looney Tunes short directed by Robert McKimson.

Porky Pig is a piper who has promised to rid the town of Hamelin of all of its rats. The cats of Hamelin, however are unhappy with Porky taking their mousing jobs. In order to ridicule Porky in the eyes of the public the so-called "Grand Poobah" of the cats decides to disguise himself as a giant rat. The fake rat first made his appearance in the mayor's office just as he is about to pay Porky his reward. Throughout the the cartoon the cat, as himself and as the fake rat, torments Porky in a variety of ways. Near the end, Porky captures the cat's rat costume, thinking that this is all that there is left of the rat. The mayor is about to pay Porky off by taking the reward out of the safe, but the cat is hiding in the safe and steals the money. Porky chases the cat to the fence and tricks him by playing a sped-up record, to make him think that Porky is bringing back all the rats. So Porky finally got the last laugh and the reward money after tripping up the cat. Porky dances down the street with the money in hand and playing his flute. 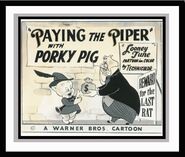 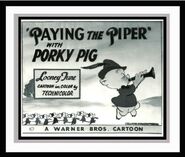