Peck Up Your Troubles is a 1945 Merrie Melodies short directed by I. Freleng.

The title is a pun on the 1915 World War I marching song, "Pack Up Your Troubles".

Sylvester is determined to get a woodpecker that just moved in, high in a tree. He climbs, but the bird greases the tree; he starts to cut it down, but a mean dog stops him (this becomes a running gag). Several other attempts follow; at one point, he puts his paw into the bird's home, and the bird puts a tomato there; Sylvester squishes it, and the bird dresses as an angel to torment him, but Sylvester sees through the disguise. Finally, Sylvester tries to blow up the tree; the dog again intervenes. Sylvester gets the dynamite off the tree and puts out the fuses, but the bird has lit them again, and now Sylvester really becomes an angel. 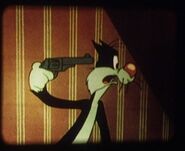 A scene that has been cut on Cartoon Network and Boomerang in the United States of America.

Retrieved from "https://looneytunes.fandom.com/wiki/Peck_Up_Your_Troubles?oldid=206737"
Community content is available under CC-BY-SA unless otherwise noted.