Pests for Guests is a 1955 Merrie Melodies short directed by Friz Freleng.

The Goofy Gophers are inspecting a new place to hide their acorns, a chest of drawers that Elmer Fudd has just bought. He unknowingly brings it home with them still inside and puts it in his bedroom. The Gophers rearrange the rain gutters so that nuts they drop on the roof will roll through the window and right into the drawers. Elmer hears the racket and when he investigates he trips on acorns that have spilled on the floor and falls down into the cellar.

Elmer chases the gophers out of the bedroom, and they scurry up the chimney. He lights a stick of dynamite, ties it to a balloon, and floats it up to them, but they pop the balloon and the dynamite falls to explode next to Fudd. He chases them back into the bedroom, but he slips on the nuts again. He grabs a water fountain to try to stabilize himself, but falls into the cellar again. When he climbs the stairs once more, the water bottle is stuck on his head, and he gurgles a curse.

He sets a box trap for the gophers. They remark that they can't imagine anyone using a trap so primitive, but they walk right into it. When Elmer traps them, he hears traffic noises from inside the box. When he hears what sounds like a big accident, he lifts the box to look, and the gophers run free.

Elmer chases them outside and they run up a tree. He begins to chop it down, but the vibration causes acorns to drop on the roof, and roll down the gutter and through the window. The house soon fills completely with nuts. Elmer opens the door to an avalanche of them and exclaims "Aw, nuts!" 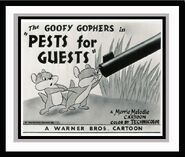 Retrieved from "https://looneytunes.fandom.com/wiki/Pests_for_Guests?oldid=241528"
Community content is available under CC-BY-SA unless otherwise noted.