Pete Puma is a character from Looney Tunes and Merrie Melodies shorts.

Pete made his debut on November 15, 1952 in "Rabbit's Kin", a Merrie Melodies animated short directed by Robert McKimson, from a story by Tedd Pierce. Animation was by Charles McKimson, Herman Cohen, Rod Scribner, and Phil De Lara. Though Pete Puma made only three classic appearances, in "Rabbit's Kin" and in "Pullet Surprise", he is often vividly remembered by cartoon fans, especially for his bizarre, inhaled, almost choking laugh (based on comedian Frank Fontaine's "Crazy Guggenheim" character). His inhaled chortling sound is "Ihhhhhhhh!" In "Rabbit's Kin", Pete is chasing a young rabbit named "Shorty", who asks Bugs Bunny for help. Bugs is eager to oblige, and subjects Pete to some of his trademark pranks.

Pete Puma's voice was used (though not by Freberg) in a Sylvester cartoon titled "Mouse and Garden" in 1960 for Sam Cat.

Stan Freberg provides commentary for "Rabbit's Kin" on the Looney Tunes Golden Collection, but spends most of his time simply repeating Pete Puma's lines in the Pete Puma voice, instead of providing any real insight on the creative process.

A similar-looking character to Pete Puma appears as a mountain lion named Rocky in the Elmer Fudd cartoon "What's My Lion", though not the same character.

More recently, Pete has made occasional appearances in Tiny Toon Adventures as the Acme Looniversity janitor.

Pete Puma made several appearances in The Looney Tunes Show, such as being a zookeeper, a past friend of Daffy's, working at Pizzarriba, being on a bowling team, etc. 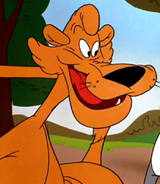 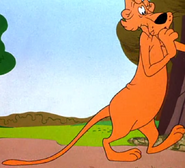 Design for The Looney Tunes Show