Phillip Edward "Phil" Hartman (24 September 1948 - 27 May 1998) was a Canadian actor, voice artist, comedian, screenwriter, and graphic artist. He is best known for his roles in Saturday Night Live. Phil Hartman was also known for his recurring roles in The Simpsons as Troy McClure and Lionel Hutz.

After eating at a restaurant, Hartman's wife Brynn Omdahl started a "heated" argument with her husband, who threatened to file divorce if she started using drugs again. Hartman then went to bed. While Hartman slept, Brynn, under the influence of alcohol and cocaine, entered his bedroom sometime around 3am (Pacific Time) with a .38 caliber handgun and fatally shot him twice in the head and once in his side.[1] Brynn drove to the home of her friend Ron Douglas and confessed to the killing, but initially he did not believe her. The pair drove back to the house in separate cars, and Brynn called another friend and confessed a second time.[2] Upon seeing Hartman's body, Douglas called 911 around 6:20am. Brynn Omdahl had committed suicide around that time by shooting herself in the mouth. Police subsequently arrived and escorted Douglas and the Hartmans' two children from the premises.[3] The two children were raised by their aunt Katherine Omdahl.

In accordance with Hartman's will, his body was cremated by Forest Lawn Memorial Park and Mortuary in Glendale, California, and his ashes were scattered over Santa Catalina Island's Emerald Bay.[4]

Troy McClure and Lionel Hutz were retired after Hartman's death and now only make cameo appearances in The Simpsons in Hartman's honor. 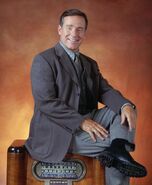 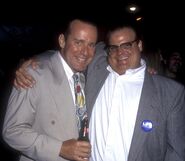 Phil with his wife Brynn