Mr. and Mrs. John and Vi Jones, a typical suburban couple, keep hearing piano music playing, but can't figure out where it's coming from. One day, their cat catches a mouse, but the mouse pleads with the cat to spare him his life if he can prove to the cat that he's "...a very fine pianist". The cat agrees, so the mouse asks the cat to retrieve his piano from his hole (a toy piano belonging to the Jones's daughter Mary Lou) and gives the mouse some sheet music to play.

Once the cat hears the music, he is astounded. When Mr. & Mrs. Jones hear the music from the other room and approach, the cat hides the mouse and the little piano inside the real piano, and pretends to play it as the Jones's look on, shocked by what they see. Mrs. Jones immediately calls the United Press. The cat promises to spare the mouse, if he can play the piano while the cat continues to pretend, hoping that his success might make him famous. Suddenly there is a flurry of media activity around the house. The cat is examined by scientists, but they can't see the cat as being anything other than an ordinary house cat with a brain the size of a peanut.

Soon, there are agents obtaining signed contracts for the cat to appear in public performances. One night, the cat performs at Carnegie Hall, displacing "Leopold Stabowski" (a play on "Leopold Stokowski", the famous orchestral conductor). The cat is dubbed "Miracle Cat" and while a disbelieving audience awaits the cat's debut, the cat drags the mouse on stage behind the curtain and puts him into the piano and tells him that when he gives the signal, to start playing. The mouse agrees.

The curtain rises, the Joneses sit proudly in a theatre box, the cat walks proudly out on stage and takes his seat at the piano. The signal is given (a tap on the mouse's head by a piano key), and the mouse starts playing "Hungarian Rhapsody" by Franz Liszt. The mouse pauses playing after the first few bars, and the cat again taps the mouse on the head, but this time, the mouse's head is turned, and his glasses are broken by the piano key, and he can no longer read the sheet music in front of him. He plays on, despite not being able to read the music, and it turns out to be a disaster. The cat is truly embarrassed, and audience members walk out of the Hall while calling the performance "ridiculous", "insulting", and "preposterous", and the cat is exposed as a fraud which causes an uproar in the music world.

Home again, the Joneses are relaxing, as the cat and mouse become typical enemies again, but this time, the cat ends up trying to hit the mouse with drumsticks on the drum set, the cat being intrigued by the beat. He starts playing the drums and the mouse pulls his piano out of his hole, and the pair begin playing jazz. Mr. and Mrs. Jones witness this, and Mrs. Jones tries to call the United Press again until Mr. Jones says, "Oh, no. No you don't! We're not going through that again!" and hangs up the phone.

Mr. & Mrs. Jones continue to enjoy the music and relax to it in their easy chairs. They dare never to tell anyone of their unusual house pets.

The version of this cartoon shown on Nickelodeon (and ABC's The Bugs Bunny and Tweety Show after 1994) cut the scene near the cartoon's end in which the mouse emerges from a cymbal on the drum set and acts Chinese for a few seconds.[1] Both Cartoon Network and Boomerang, despite having a history of editing out Chinese gags, surprisingly left this scene uncut. 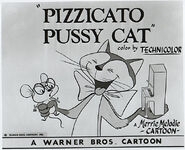 Retrieved from "https://looneytunes.fandom.com/wiki/Pizzicato_Pussycat?oldid=221714"
Community content is available under CC-BY-SA unless otherwise noted.