Playboy is an anthropomorphic silent baby penguin who wears a black top hat and bow-tie. He is very soft-hearted and emotional, prone to silently shedding tears when his feelings are hurt. During winter, his dripping tears freeze into ice cubes. 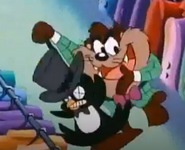 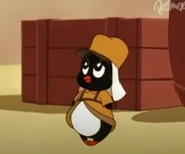