Playboy Penguin is an anthropomorphic penguin who wears a black top hat and bow-tie. He shares stardom alongside Bugs Bunny in two cartoons: "Frigid Hare" (1949), and "8 Ball Bunny" (1950). Playboy also appeared in the crowd scenes of Space Jam and made an appearance as a customer in Bah, Humduck! A Looney Tunes Christmas. He can be considered to be an actual friend of Bugs Bunny in the original cartoons, as opposed to Daffy Duck, his rival-turned-partner.

Playboy is a cute, silent baby penguin whom is very soft-hearted and emotional; prone to silently shedding tears every time his feelings are hurt. During winter, his dripping tears freeze into the form of ice cubes. 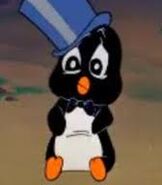 Retrieved from "https://looneytunes.fandom.com/wiki/Playboy_Penguin?oldid=202691"
Community content is available under CC-BY-SA unless otherwise noted.