Accompanied by a stereotyped native supply carrier, Porky goes on safari for the rare pygmy ant of Central Africa which is valued at $150,000. The ant (also stereotyped) is discovered. The chase is on, with all kinds of antics as Porky tries to capture the pygmy ant. The ant outwits Porky and his less-than-bright native bearer. Ultimately though, the ant saves them from an attacking lion, thereby earning a handsome trophy. 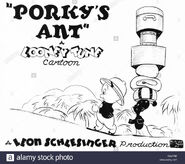