An agricultural farm is giving prizes for the person who makes the largest homegrown project. Porky and a rival neighbor both plan to win the agricultural farm prize, Porky with his garden and the neighbor with his chickens. Porky carefully plants a box of seeds, one by one, while the man is busy mixing a bunch of bottles of items together. Porky goes to retrieve something as the man puts the brand new mixture into the feeding bin for his chickens, but when they try it, they spit it out in disgust and seek food elsewhere. Porky grabs his bottle of quick grow, a hair tonic he hopes would work on his garden. To his amazement, it does, but he says nothing of it and heads inside his house.

The neighbor checks out his handy work and comments on it, allowing his chickens to come over and eat all of his fruits and vegetables. A little chick and a bigger chicken fight over a watermelon until it flings the chick away. The chick sadly retreats until it sees a bunch of spinach and decides to munch on it instead. The chick then comes back and punches the mean chicken before finishing the watermelon.

When his garden has almost entirely been eaten, Porky finally notices the chickens and tries to get rid of them. But alas no luck, so he yells at the neighbor to get them back into his yard but the neighbor claims he doesn't know how they got on Porky's property, then pretends to try and make them return. He then leaves while a sad Porky heads to his door, only to find a long vine and follow it to a giant Pumpkin!

When the chickens see it, they aim to grab it, so Porky brushes right through them all, not allowing any of them to make contact with it. He accidentally drops the pumpkin but catches it when he runs through his entire house. He runs straight for the country fair while the man summons his chicken back and leads them there. As the two of them show up, one of the workers is showing off the talent of a pill he has developed. He gives it to his elephant, turning it into a mouse.

As the neighbor leads his fat and fed chickens to the prize area. One of the bottles spills and the chickens eat all of the pills, making them grow twice their size. As he arrives, Porky is being awarded first prize. The judge immediately gives the prize to his neighbor instead. Suddenly the chickens shrink and revert to eggs!

The "iris out" is interrupted by Porky rightfully grabbing the prize money back from his Italian neighbor. 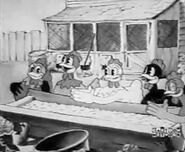 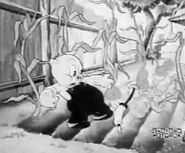 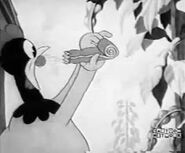 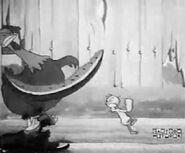 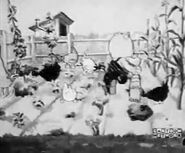 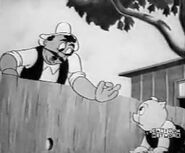 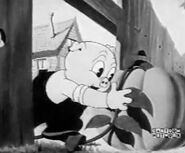 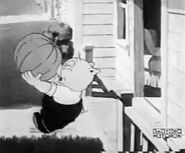 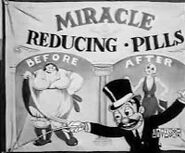 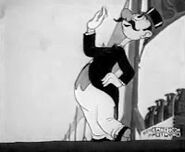