Several rabbits are eating carrots and ruining crops. One of the rabbits warns them to evacuate. Soon, Porky and his dog meet him and try to outwit the rabbit in the forest. Porky and the rabbit get in a long, long fight, and soon the hare thinks he has won. Porky finds him, however, and he doesn't have any brainstorms to protect him. The rabbit shows Porky a photo of himself and of how many children he has with his wife.

While Porky attempts to shoot down and procure the rabbit, he befalls to an inundation of quick-witted gags as the rabbit asks Porky: "Do you have a hunting license?" As Porky reaches for his pocket to obtain the document within sight of the hyper-hare, he suddenly snatches it out of Pork's grasp, rips it in two and remarks: "...well you haven't got one now...hoohoohoohoohahahahah..hoo hoo hoo ha ha ha!" and makes a getaway by twisting his ears as though they were a helicopter propeller and flies away. Ultimately, the rabbit wins, with Porky ending up in the hospital from injuries sustained in the ill-fated attempt to catch his game. 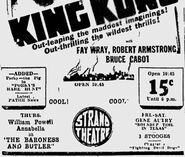 An ad in the Spartanburg Herald-Journal in Spartanburg, SC, 19 June 1938