Porky is reading the story of the gorgon, a Greek myth about a woman who turned everyone she looked at into stone. His mother tells him it's time to go to bed. While he's asleep, he dreams of being a Greek hero known as Porkykarkus. In this version, the Gorgon runs a photo studio, and Porky is able to save by sneaking in and grabbing her life-restoring needle just before he wakes up.

On Cartoon Network, the scene of the Gorgon's guard telling Porky that he's next to be turned to stone followed by Porky picturing himself as a piggy bank, is cut (barring its appearance in The Bob Clampett Show), most likely because the Gorgon's guard looks as if he's in blackface.[3]

Jerry Beck in 2009 with Porky statue from title card 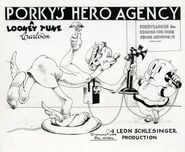