A radio news report from Walter Windshield says that a mysterious phantom has been haunting Hollywood for weeks, ruining pictures and frightening stars. At Warmer Bros Studios, the phantom is on his rampage.

Studio cops look all around the lot for the phantom. They even question famous movie monsters like Frankenstein, who's biting his fingernails as a cop grills him with questions.

Later, the phantom climbs a spiral staircase all the way to the ceiling, then slides back down the pole to the top floor. He sneaks into The Invisible Man's dressing room and reveals himself to be The Invisible Man himself. He says that the reason he's been doing what he's doing is because he was fired after starring in one picture. He says that he will crack every camera, wreck every reel, smash every set and scaring off every star away from Hollywood, and laughs.

Fed up with the phantom's wrath, the public and the police call upon Mr. Motto to stop him. Unfortunately, Mr. Motto is currently on vacation. The police chief doesn't care if Mr. Motto is on vacation and demands that they summon him.

Mr. Motto is on a tiny island reading a book on Ju Jitsu. He suddenly receives a phone call and answers the coconut. The caller tells Mr. Motto about the phantom, so he ends his vacation flies off to Hollywood. He crash lands in the chief's office and greets the chief with a throw down. Mr. Motto apologizes and goes to work at once. 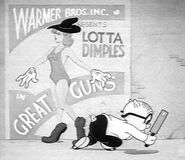