Porky is getting ready for his birthday party, along with his dog, Black Fury. While preparing, he receives a package in the mail from his uncle Pincus. The package contains a tiny silkworm, which sews garments (actually using tiny knitting needles) when the word "sew" is spoken—this later becomes a running gag. Porky commands the worm to sew, and the worm immediately sews a sock. Porky and Black Fury look on in awe. Porky again gives the command, and this time, the worm sews a brassiere, which Porky quickly disposes of bashfully. Porky and Black Fury then proceed to the bathroom, where Porky puts a sizable amount of hair-growth formula on his head, producing no results.

Regardless, he picks up a comb, and combs his "hair." Then realizing that he must get ready some more, Porky hurriedly leaves the bathroom. Black Fury then takes the bottle of formula, seeing that it contains ninety-nine percent alcohol, and begins to taste and drink it. not only does Black Fury become shaggy after ingesting the formula, but also becomes severely intoxicated, loudly shouting "Hap...py Birthday!" Meanwhile, Porky puts the finishing touches on his birthday cake and ice cream, when he hears a knock at the door. It is his friend Penguin, who gruffly mumbles "Happy Birthday, Porky," then rushes to the table and begins wolfing down ice cream.

Goosey then saunters in the door, walking in his trademark loose, wobbly fashion. Goosey holds out his hand for porky to shake, but Porky, upon doing so, realizes the hand is a prop, adorned with a sign reading "Happy Birthday, Fat Boy!" As Goosey is seated, Porky chuckles and states, "He's so silly." However, Porky repeatedly stutters on the word "so", and the silkworm, in Porky's pocket, frantically begins sewing garment after garment.

As the garments slide out from underneath Porky's jacket, he notices that they are all women's underwear and brassieres, and, as before, hides them guiltily. Somehow, the silkworm has gotten itself into Penguin's ice cream, and upon his utterances of the word "so", the worm does its stuff. However, the garments are in the ice cream, so as Penguin is eating, he pulls out of his mouth, to his disgust, a sock. Then, Penguin is having trouble swallowing, and the audience sees that a top hat has gotten into Penguin's mouth, and pops up, with Penguin's head assuming the shape of the hat. After several failed attempts to quell the hat, Penguin shouts at Goosey to assist him.

Goosey then unwittingly rams Penguin's head into the wall, hits him over the head with a mallet, and slams a washtub over his head, to no avail. By this time, Black fury, still intoxicated, attempts to shave himself upon the realization of his shagginess.

However, after putting on the shaving cream, he walks into the living room. Porky mistakes Black fury for a mad dog, and Porky, Penguin, and Goosey all run around the house, with Black Fury close behind, unbeknownst to him that it is he who is the mad dog. After several gags and antics around the house, the shaving cream is removed, and Porky sees that it is just Black Fury after all. Penguin, angry at the dog, rolls up his "sleeve" and stares Black fury down, uttering "so.." in anticipation of a fight. This sets the silkworm off for the final time, wrapping Penguin up in several garments to a state of mummification, as the others look on. 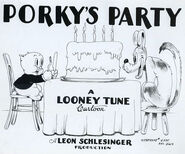 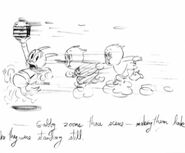 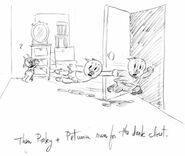