Porky owns a "Sanitary Bakery". A fly on the windowsill looks inside and becomes quite hungry at what he sees. A Jimmy Cagney-like bee arrives, and tells him to go for it, but the fly is too scared to do so, seeing Porky inside with a flyswatter.

The bee tells him how it's done, and he comes in and annoys Porky by eating a cherry off a cupcake, making Porky try to swat the "fly". However, it turns out the "fly" is a bee, and Porky gets shocked and runs out a door. The bee helps himself to a bunch of food. After the bee eats one of the buttons off a gingerbread man, causing its pants to fall down, Porky comes back in. Porky sees the bee eating a piece of marble cake, and slowly aims for a flyswatter, but the bee prevents him from doing so, and Porky offers the bee a cherry, which he eats.

The bee eats more of Porky's food, including a "Limburger Cheese Cake", and notices Porky. He tells Porky to come near him, only for the bee to splash Porky with cream. Porky comes back with a flyswatter and starts swatting, but the bee electrifies the flyswatter, also electrocuting Porky. After this, Porky runs back out a door again.

The bee tries to teach the fly how to get food without being swatted, and the fly gets disguised as a bee. However, the fly's plan to get food backfires when the disguise he's wearing falls off and Porky manages to swat him several times. The bee returns, wondering how the fly's plan went. The bee goes inside to have food, but instead he gets swatted multiple times. It is revealed that the rather beat-up fly is swatting the bee. 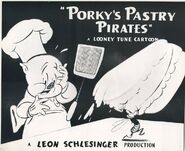