Porky is riding to his girlfriend Petunia's home. Upon arrival, he knocks on her door and asks her if she would like to go on a picnic with him. It doesn't take her long to pack, and they walk by the window where a sleeping Pinky is. Pinky wakes up and follows them.

On their way they see Pinky on a scooter and quickly catch him. Porky then tells him that if he behaves, he will tell him a story. Pinky pulls the nail out of side-car of Porky's bike, causing it to become separated and both pieces of the vehicle go on separate paths. Pinky has fun while Petunia panics and covers her eyes. After they pass a speeding train, the vehicle re-connects and Porky just finishes his story. Pinky claims it was the best story he "never" heard and they soon arrive at the park.

Porky takes a nap as Pinky watches a small squirrel. Pinky grabs a pair of scissors and proceeds to chase around the poor squirrel. Petunia manages to grab him and lays him down for a nap next to Porky. As she leaves however, Pinky gets up and smacks Porky with a big wooden plank. Porky awakes with a start but sees nobody nearby, other than a sleeping Pinky. As he tries to get back to sleep, Pinky is about to strike again but Porky catches him and asks what he was about do with the wood plank. Pinky begins to explain, but ends up smacking him repeatedly with the plank of wood before skipping away.

Porky then grumpily lays on his side as Pinky skips his way into the zoo, past a sleeping crocodile/alligator. Petunia begins to shout and tells Porky about Pinky in the zoo. Soon Porky finds Pinky sleeping with a big cat and its babies. Porky sneaks into the cage and quickly tries to escape being eaten by the big cat. He gets out to grab a faint Petunia after putting down Pinky, then they resume chase until they manage to get the cat stuck in the metal bars.

As Porky returns to Petunia he falls into the mud. But Petunia doesn't mind and she kisses him anyway!

Seeing the squirrel again, Pinky prepares to cut it's neck again with the scissors. Unfortunately, Pinky didn't count on the squirrel being prepared this time and having its own smaller plank of wood. The squirrel hits Pinky with it repeatedly leaving distraught, having finally suffered a fitting punishment for all his mischief.

Screenshot of 2021 restoration from WarnerMedia RIDE

This scene has been edited on Nickelodeon (but not Cartoon Network [both American and overseas]) and the redrawn colorized version. 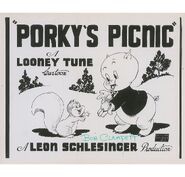