A Scottish dog, Sandy, starves as he asks his friend Rover what he's doing in a car. Rover goes along telling him how he got a master. He goes up to Porky's apartment room while he's taking a bath. He puts on a towel and answers it. Rover walks in and says "Look chum, you ain't got no dog and I ain't got no master! It's official that we should get together!" Porky says as he kicks Rover out, "Sorry, but I don't want a dog!" Rover bangs on the door and Porky gets it. Rover says, "And I'm very affectionate too!" then kisses Porky. Porky walks over to the edge of the floor carrying Rover then drops him down the stairs. He runs back to his room panting along with Rover standing by him. Then Rover flicks Porky's snout and dresses up like Carmen Miranda and sings "Mi Caballero", by M.K. Jerome and Jack Scholl. Porky kicks him out again. Rover walks back in yelling "HEY! I can take a hint, you don't want me! Nobody wants me!" He walks over to the window. "Farewell cruel woild," he says. He pretends to jump. Porky runs over. He looks and sees Rover laying on the edge. He says, "Lose somethin' Bud?" Porky shuts the window while Rover's pretending that he's going to fall. But he actually falls. Porky runs down the stairs and tries to catch him. He misses! He cries "Oh puppy, s-speak to me, oh puppy!" Rover wakes up and says "Gosh! I didn't know ya cared!", then kisses Porky and imitates Lou Costello's catchphrase "I'm a baaad boy!" 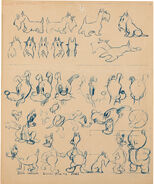