A mouse whistles and walks by, but unknown to him, a hungry cat is following him. The cat follows the mouse around the fence and attempts to go for him, but the mouse goes through a mousehole, and the cat crashes into bottles, and he taps his fingers in defeat. Later, Porky, the owner of a fish store, and his fish sing about the store to the tune of "Oh Dear, What Can the Matter Be?" Soon it is lunchtime, and naturally Porky goes out to lunch. He even puts up a sign to inform the customers. While he's out, the cat walks by and decides to come in and take a fish and eat it for himself, but the fish take notice and plan to attack him. The electric eels inform a turtle in another tank, and the turtle makes like Paul Revere and informs the other fish. The fish do indeed attack him at all sides and in different ways. For instance, the eels shock him and a mussel clam with the arms of Popeye the Sailor punches the cat. That makes him leave the store in fear just as Porky returns. After the cat is scared out, the mouse appears and it tries to eat it, but the mouse turns monstrous, scaring the cat, shrinking him into a crying kitten as the mouse walks away. 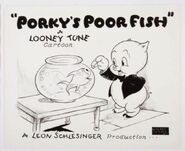