An audience enters a movie theater run by Porky Pig. There are a series of short sight gags, including a firefly acting out as an usher, a kangaroo that is taking tickets and putting them in her pouch, and a chicken buying child tickets for her eggs. A skunk meanwhile attempts to buy a ticket that only costs a nickel, only to find he has a scent. He attempts to find a way in.

At the same time, Porky is introducing the show, which is some crudely-drawn cartoons featuring stick figures;

By the end, the audience has deserted the theater all because of the fact that the skunk was able to sneak inside. Porky is surprised to learn about this, but the skunk enthusiastically applauds Porky's film, having enjoyed it because it too "stinks."

September in the Rain Lyrics

The leaves of brown
Came tumbling down, remember?
All those leaves, they're falling on me
That's what they're doing
In the rain

Aw, look at those little clouds up there
Up there on the hill
Aw, and the little raindrops, they're falling on me
That's what they're doing
Mammy, aw look up there at the sun
It's shining on your little sonny boy
Come on, play it for me

Spring is here and it's September. That's what it is
Build it up, play it, that September
In the rain

Part of the sequence that was frequently censored

Porky with a poorly drawn caricature of Henry Binder 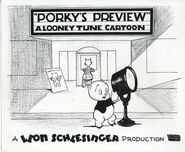 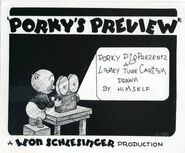