Porky's beloved train, the No. 13½ engine named Toots the 15th Century Unlimited, is to be replaced by a streamlined train by the name of Silver Fish. After Dirty Digg, the driver of the Silver Fish insults Toots, Porky mutters that his train could easily take on the streamlined train. Dirty agrees to a race that ends with Porky being the victor thanks to an insulted bull seeking revenge. He becomes the new driver of the Silver Fish whilst a battered Toots is on a trailer behind with "Headin' for the Last Roundhouse" written on a sign attached to it.

(1985) VHS
Puss in Boots and Other Cartoon Classics 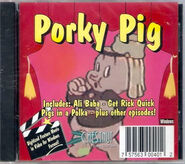 On Nickelodeon airings, the original black and white, the redrawn colorized version, and the computer-colorized versions cut the scene where the Silver Fish races by a woodpile and a little black man is revealed, referring to a racially offensive saying. In the redrawn version, the scene with the Silver Fish going through a tunnel and turning it inside out was also gone. In addition, there was sometimes a false "iris-out" so that this cartoon would end with Porky's train flying over the finish line and the crowd cheering; deleted was Porky as the new engineer of the Silver Fish. MeTV also edited this scene in January 2022, but left it intact previously back in June 2021.