Porky is working a typical day at his gas station. He asks where to put the gas into the car he's servicing, and the girl lifts up the part to reveal the hidden gas part. Porky fills it up, and another car comes by soon. He asks Porky to put oil into the motor, and a green car with a flat tire comes by next. The angry man yells at him, then ties the tire in a knot to fix it himself, and he drives off,

Coming to another blue car, the man asks Porky to help remove a bump. This seems to be an easy task, until Porky sees that every time he hits the bump, it appears elsewhere on the car! He tracks it around the entire vehicle and even tries to trick it, but he accidentally smashes the window.

An impatient woman nearby is beeping her horn, trying to get service. She asks Porky to fix her tire, then tells him not to disturb her baby, who is asleep in the back. Porky begins to take off the tire when the baby hits him on the head with a bottle, then pushes one of the parts in front to make the wheel spin rapidly!

Porky then flies into a nearby pole and gets the tire stuck on his butt. The baby frees him by throwing his bottle at him like a slingshot. Porky checks on the baby, now suspicious, but sees nothing wrong, and he tries to work on the engine, which the baby keeps closing on him! Porky is then shocked when the baby turns something on. When the baby hits the horn, it hurts his ears. Soon Porky is trying to re-oil something, and the baby causes the machine to start moving and sticks to Porky's nose.

Once again Porky checks on the baby to find it asleep in the front seat. The baby then makes faces at him when his back is turned, so Porky tries to trick it, and he catches the baby in the act. The baby then winds up the window on Porky's nose and leaves the car. Porky tries to make him stop, but he doesn't listen, and instead he puts the air hose into Porky's pants, causing him to fly around! After he lands, the baby covers Porky in oil, then starts to bawl after covering himself in oil!

He puts the blame on Porky, who tries to deny this. She then yells and scolds Porky while putting her baby inside the car, then smacks him to keep him quiet. While she yells at Porky, the baby ties one of the pumps around the tire, and when she goes to leave, it drags the entire building behind them, causing the entire thing to break and blow to pieces! 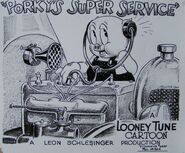