Porky's relationship with Daffy is strained, as he is a lazy sloth. Porky has found an ad inviting all comers to take on a Boxing rooster named The Champ. Porky has trouble waking Daffy up, but eventually does so by clanging a dinner platter over his head. This causes him to immediately go crazy and start warming up for a wrestling match.

In Round 1, the announcer reminds them "no hitting below the belt", so Daffy raises his shorts to cover all but his head. The Champ then blows his shorts off. Daffy flees, but with a reminder from Porky, gets on his "tricycle", wheeling through midair, and soon going so fast that the slower Champ cannot keep up, using the advantage to repeatedly punch him. Once he is out of sight, the announcer and the Champ look around for Daffy, only to discover he has hidden inside the pelican's beak. The Champ beats up the announcer to get to Daffy, finally catching him.

He knocks him out, and Porky is forced to rush back to their home to get the dinner platter and wake him up again before ten-count. Daffy awakens in his frenzy again, and begins ferociously attacking the Champ without regard to his situation, ducking all of his blows eventually knocking him out. The announcer counts to ten, and Daffy wins. Daffy wakes him up by clanging the platter, and he goes into a frenzy much like Daffy did. 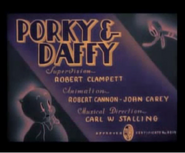