Porky Pig awaits Daffy Duck to hopefully win a bet large enough in a dice game to pay for their bill for Broken Arms Hotel, which they are charged for every luxury, including air and sunshine. However, Daffy rolls snake eyes and ends up losing the game. "Uh oh, snake eyes. Too bad, you is a dead duck, duck!" Without the money to pay the bill, Daffy resorts to stalling the manager in attempt to get out of the hotel for free.

The manager extends the cost of the bill for the damages done to the hotel and to the injuries of the manager. After a chase, the two enters a room with multiple doors blocking the entrance for the manager. Porky and Daffy uses a rope of towels to exit out the window, but the manager fires a match from the sewage drain to burn Porky and Daffy back into the bathtub. Afterwards, the two makes their final getaway with the rope again and swings it to another building, however the manager finds them one last time, and bars up the windows and doors so Daffy and Porky cannot escape anymore.

Many months later, Daffy and Porky, chained up to the leg by a ball and shackles and imprisoned in their hotel room, are beginning to lose their sanity from the snowstorm. They attempt to call for help from Bugs Bunny, knowing that Bugs could outwit anyone he encounters. However, Bugs is revealed to attempt the same schemes Daffy did and also end up captured by the manager. Bugs replies, "Nah, don't work, do they?" 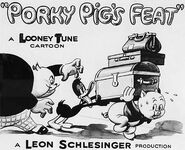