Porky and Gabby are driving along as Porky mentions how swell he thinks the day is. He asks Gabby if he feels the same, but it's clear he does not. Soon the two find themselves stuck behind a big moving van. Porky isn't too upset but Gabby gets very upset and he makes a big case out of it. The driver of the van tells him not to get so worked up, but it doesn't do any good. Gabby keeps trying to pick a fight anyway, so he drops him into the nearby mud puddle.

Upon realizing that Gabby isn't in the truck with him, Porky comes to a halt, and he backs up. He runs over Gabby twice in the process!

Soon, the two of them are traveling up a big hill, but the car overheats and gives out when they reach the very top. Porky suggest they get out and push the car, but Gabby is less than happy and laments ever coming while he and Porky both tug and push the car. With one big push, they manage to get it sent down the hill and continue on their way!

Gabby and Porky arrive at a clearing, and Porky takes out the tent, insisting he'll put it up while Gabby unloads the car. Gabby yanks and yanks until he gets everything thrown off the car and onto him. Porky has no trouble putting up the tent, but a pesky bee makes it a very painful and annoying experience. Gabby tries to help by finding the flyswatter, but he ends up hitting Porky with a shovel! The bee then stings Gabby's nose and flies onto the tailpipe of a car. When Gabby swings at it, it causes the engine to fly out from the front.

Sometime later, Porky is trying to tie down the tent, but he finds trouble in reaching the stake. He asks Gabby to hand him some more rope, which Gabby does find, but doesn't realize is tied to the motor. From the blunt force used to pull, he manages to send the motor piece flying around.

It directly comes at Porky, who takes cover in the tent, but the motor goes right through it. Gabby tries to shoot at the motor, but doesn't hit it, and winds up temporarily stuck in a tree. Porky thinks he has it then, using the rope but it doesn't stop it from flying around. Gabby gets stuck in two parts of a tree until the motor piece, and Porky get stuck momentarily. They then run to the car and hop inside, before driving off in hopes of escape, but the motor follows behind. They find themselves behind the moving van again, and Gabby tries to tell the man to get out of the way, but it's no use, and the motor causes the car and van to explode! Gabby laughs at how funny the van driver looks, who then smacks him over the head with the side arm by pulling a string. 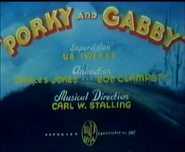