Porky in Egypt is a 1938 Looney Tunes short directed by Robert Clampett.

Porky is one of many sight-seers in Egypt one day. They see things like the dancing women, a man who can eat and withstand anything (though struggles after eating fire) and finally the touring manager who is offering tours to see the homes of the mummy stars. The tourists then take off after they all board his long camel and they take off into the desert. Porky, who had been part of the tourist group, has missed the call however and they leave without him. He finds a slow-moving camel and climbs aboard in hopes of catching up to it.

As they go in the desert, Porky tries to rush the camel and finally manages to get it to hurry up. But they still can't keep up and he is growing even hotter. Even the nearby trees and lake burn up. Soon his camel can't handle anymore and collapses. Porky tries to push it, but the camel is way too hot and tired. The heat slowly gets to the camel, causing it to start hallucinating.

It finally takes off while playing the bag-pipes, leaving Porky by himself in the warm desert. He tries to get it to come back, but it doesn't hear him. Porky looks forward to seeing a pool but by the time he reaches it, it's revealed to be just sand. Bumpy, the camel starts to hallucinate even more at this point (even imitating Lew Lehr as he remarks "Camels is the cwaziest peoples") and acts like a man riding a horse until he runs into a tree. At this point, he realizes he's okay and claims that the heat got to him. Much to the relief of Porky. But when Bumpy suddenly hears voices, he flees with Porky in tow. They run the whole way out of the desert and back into town, into a building that the strange voices can't reach. Bumpy is happy they're safe, but unfortunately Porky has lost it at this point and he has a nervous breakdown. 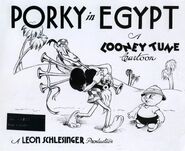