Porky in Wackyland is a 1938 Looney Tunes short directed by Bob Clampett.

A newspaper shows Porky traveling to Africa to hunt the rare dodo bird, which is worth four sextillion dollars. Porky uses his airplane to go to Dark Africa, then Darker Africa, and finally lands in Darkest Africa. When Porky lands, a sign tells him that he's in Wackyland, "Population: 100 nuts and a squirrel", while a voice booms out "It can happen here!" Porky tiptoes along the ground in his airplane and he is greeted by a roaring beast, who suddenly becomes effeminate and dances away into the forest.

He watches as the sun is lifted above the horizon by a tower of stacked creatures. Nearby, another creature rises out of a tall flower, playing "The William Tell Overture", using his nose as a flute. The creature launches into a wild drum solo, plays a tiny piano, and plays its nose like a horn, which brings out a group of odd creatures, including a rabbit dangling in midair from a swing that seems to be threaded through its own ears, a small creature wearing large female mannequin legs who encourages the rabbit to swing faster, a peacock with a fantail of cards, an upside-down creature walking with giant bare feet in his hands, a goofy looking creature wearing large glasses in a small pot, a round creature with long legs on its sides, and an angry criminal imprisoned behind a free-floating barred window that he holds in his hands while a small policeman on a wheel appears and hits him on the head with a large stick. As Porky tries to find the do-do, he comes across a duck singing "Mammy!", a horn-headed creature, a conjoined cat and dog hybrid creature spinning around like a tornado while they fight, and a three-headed stooge whose heads argue and fight amongst themselves, but temporally stop their fight to tell the viewers that their mother was scared by a pawnbroker's sign, while a small creature with a light bulb on its head translates their gibberish speech.

Finally, the Dodo appears. Porky tries to catch it, but it plays tricks on him. The dodo pulls out a pencil and draws a door in mid-air, and instead of opening it and running through, reaches down and lifts up the bottom edge of the door like a curtain, darts underneath and lets it snap back into place for Porky to bump into. At another point, the dodo appears on the Warner Bros. shield logo and slingshots Porky into the ground. Afterwards, the dodo pulls a wall of bricks in the picture and lets him crash into it. Eventually, Porky triumphs when he disguises himself as a bearded paperboy, shouting "Extra! Extra! Porky captures Dodo!" before hitting the bird with a mallet. Porky loudly proclaims to the audience that he has captured the last dodo. The dodo mockingly replies, "Yes, I'm really the last of the dodos. Ain't I, fellas?" A multitude of dodos appear, all yelling out, "Yeah, man!" Then all of the dodos howl. Porky covers his ears at that. Then the Dodo kicks Porky and stands on his head. 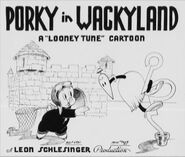