Porky the Giant Killer is a 1939 Looney Tunes short directed by Ben Hardaway and Cal Dalton.

Porky joins a giant-killing expedition marching out of town. They arrive at the giant's castle and begin to sneak inside. The giant's voice frightens them and everybody but Porky runs away. Porky accidentally wakes the giant's sleeping baby. Porky then has to put the baby back to sleep and escape. 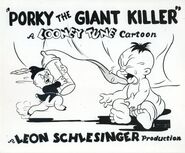