Porky the Wrestler is a 1937 Looney Tunes short directed by Tex Avery.

Porky is traveling to a wrestling match. He gets a ride from the challenger, but when he gets to the arena, Porky is accidentally mistaken for the challenger, and ends up in the ring. The champ is defeating Porky when Porky crawls out and gets the champ stuck in knots, before swallowing a spectator's pipe and doing a steam locomotive impression.

On Cartoon Network and Nickelodeon airings, there are two abrupt cuts in the music score during the "choo-choo" sequence, as a result of probable edits.[4] David Gerstein has noted that the cut footage was excised from prints as early as 1942.[5] Mark Kausler noted that in a Guild Films print he viewed, just before the scene where a spectator opens a window shade to see scenery going by, there was the beginning of a musical bit where singers sang the lyrics "She was gone..." before the soundtrack cut off. That was snipped in the Cartoon Network print.[6] 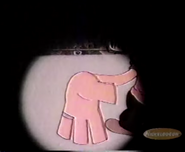