The cartoon's title is a play on "prehistoric" and "hysterical".

Bugs and Elmer are in the modern day, with Elmer's gun blasting at Bugs repeatedly. Bugs finally pauses long enough to say, "Someday, they'll outlaw this annual madness known as Rabbit Season." He hops over a stone dike, but the ground on the other side is not firm enough to support him. Elmer finally appears above ground and on the opposite side of the dike from Bugs wearing a frustrated expression, "Oh, dwat that bwasted wabbit! Where is he?"

At the same time, Bugs is asking himself the very same question. He assumes that he has fallen into a cave possibly belonging to giant Native Americans. This assumption comes from an item on the wall with odd writing on it which Bugs takes for a powder horn. He says, "Must be Indian writing, but it's Greek to me." The writing briefly changes to English: reading "TIME CAPSULE — CIRCA 10,000 BC TO BE OPENED 1960 AD," then reverts to its original format as Bugs approaches it. He pulls on a stopper on the wide end that is nearly his own size, whereupon, much to his surprise, a reel of film pops out.

Back in his hole, he views it through his own film projector. This film is described as "A Micronesian Film Documentary in Breathtaking Cro-Magnonscope. Color by Neanderthal Color." Then the narration begins.

"This is the year 10,000 B. C. This film has been made to preserve a record of our way of life. Here, good hunting defines good living."

During the opening pronouncement, a variety of clashes take place amidst the palm trees and other tropical surroundings, i.e. dinosaurs fighting each other and a sabertooth tiger and Pteranodon battling.

"Let us meet one of our most intrepid hunters. This is Elmer Fuddstone."

Fuddstone emerges from his cave and utters: “Shhhhh. Be vewy, vewy quiet. Me hunt Sabre-toothed Wabbit” — an obvious less-educated version of the modern-day Fudd's “I'm hunting wabbits” catch phrase. This statement shocks the modern Bugs, but when he asks “Sabre-toothed Rabbit?” the prehistoric documentary answers him directly via narrator:

"Yes. A Sabre-toothed Rabbit. His habitat is deep in the lush jungle."

A Sabre-toothed Rabbit hole now appears on the screen — albeit covered by a rock. Its inhabitant pushes it aside, grabs his ears and hops up out of the hole (which Bugs would occasionally do in previous cartoons), after which he munches on a carrot in Bugs' trademark fashion. The Sabre-toothed Rabbit looks very much like Bugs, but he has less-well-groomed fur and longer teeth. Bugs laughs off the possibility that he's related to him ("Get a load o' that snaggle-toothed Aboriginal-e!") but then notices the striking resemblance between himself and the prehistoric rabbit, asks the film directly if he is. The Sabre-toothed Rabbit also speaks like Bugs, as he answers: "Eh, could be."

Elmer Fuddstone now appears, spear in hand, and huddles low to the ground, remarking, "Sabre-toothed Wabbit come this way." He continues on, up into a tree, where he rips a vine off one branch and ties a loop in one end like a lasso. The looped end he allows to fall to the ground, but when the prehistoric Bugs passes by, he pulls on the string and Elmer falls down.

Next, the prehistoric Elmer grabs a hollow stick, into one end of which he places a poisonous berry. He says that no rabbit can make a monkey out of him, but as he prepares to blow it at Bugs, he suffers the effects of the projectile's consumption as the rabbit blows it at him first (he turns red, green and a mainly brown tartan pattern in quick succession before returning to his normal hues). Bugs asks him "What's up, Doc?" whereupon Elmer blasts the "tweachewous wabbit" for not allowing him to hunt him and thus provide his killer's family with clothes and food. Bugs feigns guilt and offers, "I'll help ya get me. Some smart-apple's gonna invent gunpowder someday and the gun will follow along."

This entices Fuddstone to begin developing gunpowder almost at once, and shortly thereafter he demonstrates this to Bugs. He rubs a wooden stick in a small skin bag of gunpowder, which explodes. Bugs notes, "He did it — but he did it the hard way." Elmer is now high in an old tree, ashen-faced and much the worse for wear, but he maintains a triumphant look upon his face, "NOW who has the wast waugh?"

Bugs searches for items out of which to manufacture a gun, in the end settling on the hollow stick that previously contained the toxic berry Elmer swallowed by mistake for a gunbarrel, and "a taro root for a stock." Elmer grows impatient, but Bugs soon attaches the root to one end of the stick, pours in powder and pebbles, and hands the finished product, a "Genuine Imitation Squirrelly Rifle — Also Handy For Shooting Rabbits", to his pursuer. He lights the fuse with an extremely primitive version of a cigarette lighter and tells him, "You may fire when ready." But right before he fires, Bugs tells Fuddstone, "Oops, got this on the wrong end!" He removes the stock and plugs it into the other end of the barrel, causing Elmer to shoot himself in the face.

Back in the present day when the film ends, Bugs remarks "Those smart hunters are never no match for us dumb rabbits!" Elmer arrives at Bugs' rabbit hole and catches him, "That's what you think, wabbit! Ha-ha-ha-ha-ha-ha-ha!" but fails to notice the gun plugged in at the wrong end just like his prehistoric ancestor, and therefore ends up shooting himself by mistake. Bugs mockingly imitates Elmer's quote "That's what I think! Ha-ha-ha-ha-ha-ha-ha!" 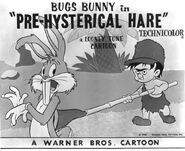