Two dogs being hunted by a dog catcher seek shelter at Sham-Fu's house, and are tossed inside. A strange bird in the clock comes in to tell them its midnight, and the dogs decide to explore. They are quickly separated when the puppy gets through a door that vanishes!

The bigger dog comes by a strange white rabbit, which shows him a few magic tricks with a vase before making it vanish. Both he and the dog curiously look for it, and the magical rabbit makes the vase fall on the dogs head. He peeks into the pocket the rabbit vanished inside of, only to pull back in pain when a lobster snags his nose!

The little white puppy meanwhile finds a strange rope and trails behind it after it hits him. After the brown dog gets the lobster off his nose, the rabbit appears again and shoots him with a pop gun. The dog peeks into the big vase to see a strange plant burst from it. Small flowers appear on the plant, and one tickles the dog, causing him to grab the entire plant and shake it about, revealing it as the rabbit. He kisses the dog and watches as it reacts in disgust. He prepares to attack the rabbit, but the rabbit makes him wait a moment and vanishes.

The little puppy continues to follow the rope, trying to get it, but the rope manages to trick him with each try and drops a vase on him, pours cold water on him, then drops the water pitcher onto his head. It gets stuck on the puppy's head, but he manages to break it. The rope turns the pieces of the yellow pitcher into small birds and summons a ball/balloon that pops when the puppy pokes it. He angrily grabs onto the wand and tries to pull it away from the rope, but accidentally swallows it.

The brown dog resumes waiting for the rabbit, who reappears, then turns invisible except for his hands. He performs more tricks and goes through a door and proceeds to smack, pinch, and tickle the dog.

The little puppy keeps hiccuping balloons while the rabbit is busy laughing at the dog. The rabbit hides in the door again and watches as the dog pounds on it, trying to get inside. Just as the rabbit thinks his fun is over, the little puppy shoots by after releasing the wind from a balloon that inflated inside of him through his mouth and hits the rabbit and open the door. After both dogs get up, they see the rabbit all tied up in the rope, so the big brown dog puts the rabbit into a box, into a chest, and finally in a giant iron chest.

Both dogs curiously watch, and the little puppy hiccups again, sending out a small red balloon. When it pops, the rabbit is revealed to be inside of it, and he uses the pop gun on the brown dog again before vanishing. The big dog is very angry now, and he punches the rabbit, sending it all the way into a lamp and fish tank.

An ad for the cartoon appearing in the Altus Times-Democrat in Altus, Oklahoma, on 17 April 1949 at the time of the short's "Blue Ribbon" rerelease.

Happy Rabbit does some magic. 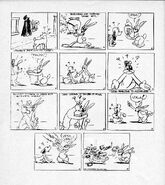