The title is a play on the comic strip character "Prince Valiant."

A Viking named Sam the Terrible is rowing upriver towards a castle, and he is noticed by two people on a nearby riverbank, who retreat to the castle sensing an invasion. As he passes by Bugs Bunny's hole, Bugs peeks out and thinks that Sam's outfit is that of an "electric can opener broken loose". As Bugs sees Sam enter the castle, Bugs takes it upon himself to fight Sam.

In Bugs' first confronting Sam, who is trying to get the locals to come out, Bugs calls Sam's outfit a Halloween costume, and takes the sword from Sam and dulls it, rendering it useless, and kicks Sam out of the castle. Sam tries to re-enter, only to see the horns of his cap get stuck in the castle door. In the meantime, Bugs paints a door on the castle walls to trick Sam, and Sam (this time with the help of a pink elephant) tries to break the "door" down, only to instead knock in some of the stones where the door was painted.

Next, Sam, with the help of the elephant, is catapulting rocks over the castle walls. Bugs sees an opportunity to ruin Sam's plans and pours pepper on the elephant, making him sneeze a rock right into Sam, flattening him. Thinking that Sam has retreated, Bugs asks for the bridge to be lowered. Sam, however, reappears and tries to cross the bridge with the elephant, but the elephant is so heavy that Sam and the elephant both fall through into the moat.

Sam then decides to try to sail in the back way (using the elephant's belly as a boat) to enter via the back. Bugs, however, notices this and while Sam is sailing, he plugs the elephant's nose with a cork, forcing him back to land for air and forcing Sam to use his hat to sail back to shore, where he chases away the pink elephant.

Frustrated, Sam tries to mine his way into the castle under one of the towers, only to have the tower pancake onto him. After this attempt fails, Sam attempts to blow open the castle door with TNT. When Sam tries to leave, however, the drawbridge has been raised and Sam is forced to wait with the lit explosives. After the door blows open, Sam rushes in, only to meet the elephant that he chased away earlier, now on Bugs' side. The elephant chases Sam with a hammer to chase him away. Bugs comments about what can be accomplished with peanuts, as the elephant chews on some.

Lobby/Title Cards
Add a photo to this gallery

The Bugs Bunny Show
Add a photo to this gallery 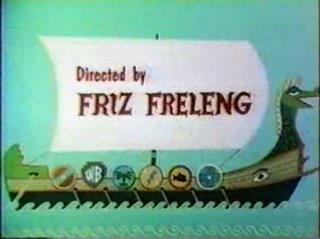 Prince Violent (Original Titles)
Add a photo to this gallery

Retrieved from "https://looneytunes.fandom.com/wiki/Prince_Violent?oldid=194147"
Community content is available under CC-BY-SA unless otherwise noted.