The title is a play on the phrase "crocodile tears."

Honeybunch is sitting on an egg in her nest and knitting. She tells Daffy that it's his turn to sit, but he refuses until she kicks his butt. He moves the egg for a moment to fluff up the nest, but the egg rolls away down the hill and into another nest full of eggs. Unbeknownst to him, these are alligator eggs. Unable to tell the difference, Daffy picks an egg at random and brings it back to his nest. The mother alligator sees him take an egg and cries out, and the father alligator chases Daffy. They squabble about the egg back and forth for a while until Honeybunch returns.

Daffy uses a grenade painted white as a trap for the crocodile. Honeybunch mistakes it as Daffy throwing away their egg, so she strangles Daffy and forces him to sit on that "egg", ignoring Daffy's explanation that it is a grenade, not the real egg. It explodes, setting his tail on fire.

She makes him sit on the real egg until it hatches into a baby alligator. And when Daffy starts clobbering the alligator with a bat, she tells her husband it's just an ugly duckling which will grow into a beautiful swan. Meanwhile Mrs. Alligator tells her husband something similar, since both families had swapped eggs.

The version of this short shown on CBS's The Bugs Bunny/Road Runner Show was cut to remove Daffy substituting his egg for a firecracker so the alligator can get it, only for the alligator to catch wise and force Daffy to sit on the firecracker.[1]

Daffy: But, Honeybunch, sitting on eggs is sissy stuff!
Honeybunch: Stop mumbling and sit on that egg!
Daffy: I'm not sittin' on no egg!
Honeybunch: Sit on that egg or I'll...
Daffy: Nope, no sittin'!
[slap]
Daffy: [grudgingly walks back to the nest with his backside forced up] Someday she's gonna go too far.

Daffy: Eeney, meeny, miney, mo. Where did that stupid little egg go? Oh, well, what's the difference? An egg is an egg.

Daffy: Some people just can't seem to mind their own business.
[alligator gets Daffy]
Daffy: All right, wise guy! Open up or else!
[alligator opens mouth]
Daffy: One more move out of you and I'll let 'im have it! What a stupe.

Honeybunch: I should have listened to Mother... 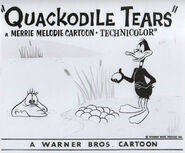