Queen Tyr'ahnee is the queen of Mars in the Duck Dodgers series and the loyal leader of the Martian empire.

She had an on and off relationship with captain Duck Dodgers, saying that he is brave and heroic. She's clearly displayed affection towards him on several occasions, yet she has also been known to despise him. However the hate she exhibits towards him is often halfhearted and followed by a positive remark. At one point they almost married, but Dodgers refused the position as king of Mars, which infuriated her afterwards (in fact his refusal was attributed to Marvin the Martian (Queen Tyr'anhee's commander and Duck Dodger's arch nemesis) fooling him into thinking that the role required him to fulfill a repulsive and unpleasant responsibility).

Commander X-2 had a hidden love for Queen Tyr'anhee that he would do anything for her and he often loathes her romance towards Duck Dodgers. In the episode "Of Course You Know This Means War and Peace (Part 2)" his love for her was exposed by Z-9 and as a result presumably caused him to confess his true feelings after her rescue, months later X-2 proposed to her yet the Queen called off the wedding for she still had feelings for Dodgers.

Queen Tyr'ahnee has mid-back length white hair, purple eyes and a magenta color stripe that runs across the middle of her face. She wears a gold and purple, green-jeweled head band accompanied by a gold bikini top, gold bracers, a gold necklace, purple shoes, and a purple skirt that has thigh high slits on both sides with a gold belt that has a green jewel in its center.

Queen Tyr'ahnee is noted to be a female counterpart of Marvin the Martian who wears outfits reminiscent of ancient Egyptian royal garbs.

Queen Tyr'anhee is very skilled in both hand to hand and vehicular combat, and has been implied that she has ninja like abilities shown by how she successfully kidnapped The Cadet with presumed ease in the episode "The Queen is Wild", and in the manner of how she constantly destroys training bot Dodgers in trainings.

Her physical appearance more often than not can infatuate others. 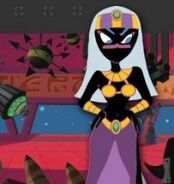 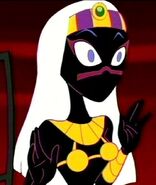 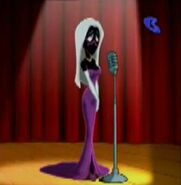 The queen singing the blues 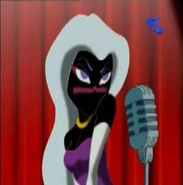 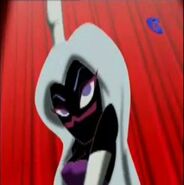 The queen in her wedding gown
Add a photo to this gallery
Retrieved from "https://looneytunes.fandom.com/wiki/Queen_Tyr%27ahnee?oldid=200083"
Community content is available under CC-BY-SA unless otherwise noted.