The title is a play on "rabbit skin", but is also a literal term in that Bugs is caring for a "kin", here, another rabbit.

A cute little bunny named Shorty, with a high-pitched voice, is running from Pete Puma, until he stumbles down Bugs Bunny's rabbit hole. The little guy tells Bugs his problem, "My heart pounded, my legs trembled, I was frozen with fear!" Bugs agrees to help him out. Bugs then proceeds to play tricks on Pete. Firstly, he asks Pete to stay for tea. He then holds up the sugar bowl and asks the puma how many lumps he wants, to which Pete Puma replies "Oh, three or four". Bugs repeatedly hits Pete Puma on the head, leaving him with three or four lumps on his head. Bugs then decides he gave him "one lump too many", flattening it with a reflex hammer. Pete had also offered Bugs an exploding cigar, and while Pete is dazed, Bugs puts the cigar in Pete's mouth and lights it.

Pete next tries to disguise himself as the little rabbit's mother. Once again, Bugs wants to have him for tea, but this time Pete declines the offer. He says, "But I don't want no TEA! It gives me a HEADACHE!" Instead, Pete suggests that he and Bugs have coffee instead. The "lumps" gag repeats itself, only this time the puma has protection in the form of an "ACME Stovelid" on his head. Bugs removes it with his "ACME Stovelid Lifter", revealing more lumps on Pete's cranium, which flatten him out.

Shorty enjoys the shenanigans so much that he wants to get involved. So, as the little bunny hops down the road alone, Pete grabs him and runs home to his cave, intending to cook him. Bugs shows up in a costume disguised as Pete's second cousin, Paul Puma. He insists on helping his "cuz" get the fricasseeing off to a good start by getting coal for the fire and asking how many lumps Pete wants for the stove. Pete says "You better give me a lotta lumps, a whoooooooole lotta lumps", then catches himself just as Bugs rears up to hit him again. "Oh no, ya don't", he says. "I'll help myself!" 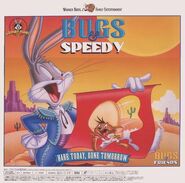 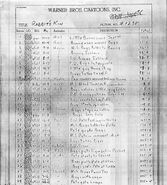