Elmer Fudd is hunting, and he says, "Be vewy, vewy quiet! I'm hunting wabbits!" Daffy Duck lures Elmer to Bugs Bunny's burrow and watches from aside while Elmer attempts to shoot Bugs. But Bugs informs Elmer that it isn't rabbit season, but instead duck season. Daffy emerges, irate, and attempts to convince Elmer that Bugs is lying.

Daffy then sees a sign that Bugs has nailed to a tree saying "Duck Season Open". As he sees Elmer approaching, he disguises himself as Bugs, telling him that it's duck season. Bugs appears disguised as Daffy, complete with webbed feet and fake bill, and asks Daffy why he thinks it's duck season. Daffy points at the tree where he previously saw the "Duck Season Open" sign. However, the sign nailed to that tree now reads "Rabbit Season Open", implying that Bugs replaced the signs. Elmer, of course, shoots Daffy. After Daffy gets blasted, he goes up to Bugs and says, "You're desthpicable!" The two walk away, getting out of their costumes as Daffy rants to Bugs how despicable he is. Bugs then begins to read duck recipes from a cookbook and Daffy does the same with a rabbit recipe cookbook. Elmer tells them he's a vegetarian and only hunts for the sport of it. Outraged, Bugs gets in Elmer's face and claims "Oh, yeah? Well, there's other sports besides huntin', ya know!?" Daffy then offers to play tennis. Elmer blasts him again, then begins shooting and chases both of them all the way to the rabbit hole. Bugs comes out of his hole and accuses Elmer of "hunting rabbits with an elephant gun", suggesting Elmer shoot an elephant instead. Just as Elmer is considering it, a huge elephant appears from literally nowhere, threatens Elmer in a Joe Besser voice, "You do and I'll give you SUCH a pinch!" and preemptively pounds him into the ground before striding off.

Elmer finally loses patience and decides to take out both Bugs and Daffy. Daffy comes into the scene, disguised as a hunting dog and Bugs comes in disguised as a lady hunter. When Daffy bites Elmer, Bugs' ear reveals and Elmer sees through their disguises and threatens to finish them off.

Elmer finds the two arguing by a tree with a sign that starts with the words "Rabbit Season"; Bugs and Daffy continue to pull off the sign to alternatively reveal it is "Duck Season" or "Rabbit Season" until they hit a final sign, proclaiming it to be "Elmer Season". With the roles reversed, Elmer gets a taste of his own medicine and starts running, avoiding gunshots whilst Bugs and Daffy, dressed as hunters, stalk him. Bugs says "Be very, very quiet… we're hunting Elmers!" with Daffy imitating Elmer's laugh. 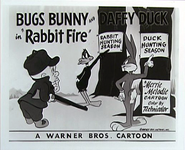 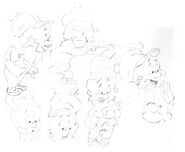 First page of the script