The title is a parody of Robin Hood.

The Sheriff of Nottingham catches Bugs eating the King's carrots and is about to arrest him, when Little John shows up and tells them that Robin Hood is on his way.

"The real" Robin Hood finally appears in a clip from the classic 1938 movie, The Adventures of Robin Hood, which starred Errol Flynn.

The film starts out with a lengthy sequence animated by Phil Monroe where Bugs tries to silence an alarmed carrot patch. Monroe did the scenes up to where the Sheriff is lying on the ground with little kings spinning around his head.

Ken Harris handles the next short bit where Bugs is standing examining a wall and musing how he might get out. He is interrupted by the Sheriff who chases him.

Ben Washam animates the entire section where Bugs and the Sheriff are in the Royal Rose garden and Bugs turns the whole situation around and acts like a real estate agent. Washam's scenes continue to the point where Bugs is climbing the same brick wall that we saw him musing over before. The sheriff, who we see in the distance brandishing a bow and arrow, shoots Bugs down by grazing him.

Bugs falls into Little John's arms (he was introduced ignominiously in the first part of the film) in a Ken Harris scene.

Phil Monroe animated the introduction sequence between Little John and the Sheriff.

Lloyd Vaughan handles the next sequence, a protracted one in which Bugs laboriously heralds the arrival of an unseen king. The Sheriff knows it's probably a trick but because Bugs is so insistent he almost challenges Bugs to prove his assertions.

Ken Harris animates Bugs Bunny emerging in royal garb, bedecked with a crown and holding a sceptre, much to the surprise of the Sheriff, who bows down to him, and the knighting speech above. Harris' animation continues as the Sheriff sings "London bridge is falling down" while he's staggering in a stupor.

Lloyd Vaughan does the cake baking sequence, then it's back to Ken Harris as Bugs positions the cake so the Sheriff's face will fall into it when he collapses. Harris continues with Bugs' head nod and a lovely acting scene where he makes fun of Little John continually talking about Robin Hood's arrival.

Ben Washam animates the close-up of Little John and Bugs' take when he sees the live-action Errol Flynn from The Adventures of Robin Hood.

The cartoon finishes off with Ken Harris animating Bugs saying, "Nah, that's silly. It couldn't be him." 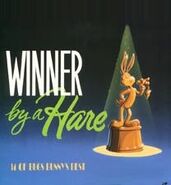 The ABC version of this cartoon cut two scenes:[1]