The title refers to a then-recently banned boxing move, a punch to the back of the head.

The World's Championship Fight is about to begin in a gigantic boxing stadium near Bugs' hole. Tonight's fight features the battle between the Champ, "Battling McGook", and his challenger "Dyspectic McPlaster". During the fight, Crusher doesn't even give his challenger a sporting chance at all. This prompts Bugs Bunny to heckle Crusher for playing dirty, enough for the latter to come up behind him. When Bugs calls to Crusher to pick on somebody his own size, Crusher decides Bugs will do, and throws him through the Dressing Room and into a corner of the ring. Bugs then admits it was a mistake to open his "big fat mouth".

In the ring, Crusher shows off his muscles by bulging his biceps and getting muscles on his muscles. Unimpressed, Bugs tries flexing his muscles, which are only grape-sized.

The bell rings to start Round 1. Bugs comes up to Crusher pretending to give him a sporting chance. Amused at Bugs' inexperience, Crusher just punches Bugs back to his corner. Bugs charges and gets pushed back twice. Bugs then decides to pull off a little "stagety." Coming back to the center of the ring, Bugs fakes fainting. When Crusher looks over him, Bugs punches Crusher up to the ceiling. The bell then rings to finish Round 1.

While Bugs relaxes to a good book, a comfy armchair, and a radio, Crusher decides to cheat by building a brick boxing glove over his right hand. The bell then rings to start Round 2. Just as Bugs and Crusher come towards each other, Crusher punches Bugs with his brick boxing glove, sending Bugs back to his corner.

Just as Bugs is "kissing the canvas," the sportscaster starts the count, but Bugs snatches his microphone and immediately starts describing action that's not taking place, confusing Crusher long enough to trip over him. Angered, Crusher pulls off his gloves and comes to the center of the ring, which makes Bugs pull off his gloves (stuffed with horseshoes) and come to the center of the ring. The two of them wrestle, with Bugs picking Crusher up and then getting flattened by Crusher's weight. Bugs then gets himself flapped out again, and begins trying to pull Crusher's leg, while Crusher plays solitaire with cards. Knowing this is not getting him anywhere, Bugs takes a plank and breaks it, making Crusher think Bugs broke his leg. Bugs comes in disguised as a doctor and, after a fake examination, the prognosis being: "A compound fracture of the left clavichord, with complications yet", wraps up Crusher from head to toe in the bandages. Then, he punches Crusher so that Crusher bounces off the four poles of the ring, making "Tilt" flash up as in a pinball machine.

Before Round 37, Crusher sneaks over to Bugs' corner and puts axle grease in his resin box. While Crusher sneaks back to his corner, Bugs wipes his feet unknowingly in the grease. Crusher sees this, and when the bell rings to start the round, he runs over but stops immediately. Bugs is "ice skating" with the grease on his feet. He punches Crusher in the face multiple times. After spinning around, Bugs calls "Ta da da," only to have Crusher punch him in the jaw and back to his corner.

In Round 48, Crusher gets up just as the bell rings, but stops when Bugs comes in disguised as a popcorn vendor. Bugs gives Crusher a box of hot buttered popcorn, which Crusher discovers too late is explosives in disguise. It blows up in his face.

In Round 73, just as Crusher is practicing getting up from his corner, Bugs comes up and asks him to hold a giant slingshot. When Crusher wonders what is going on, Bugs stretches the rubber band back to his corner and puts a boulder in it. Then he lets go of the rubber band, so the boulder hits Crusher in the face, knocking him out and sending him falling to the canvas.

In Round 110, Crusher ties Bugs to a railroad track. Then he hurries up the tracks and fetches a steam train, and starts to go towards Bugs head on. All Bugs can do is start sweating and watch as the train comes closer and Crusher gloat over his intended victory.

Just when it looks like Bugs is scared as the train is going to hit Bugs, the film appears to fall out of its sprockets and then it "breaks". Bugs comes onto a solid-white screen and breaks the fourth wall by apologizing to the audience for the inconvenience, but admits the film "didn't exactly break". He then takes out a pair of scissors and gives a smirk. 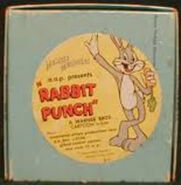