Bugs Bunny and Daffy Duck argue over which of them is "in season" (it is really Duck Season as Daffy says while hidden from Bugs in the beginning), while a befuddled Elmer Fudd tries to figure out which animal is telling the truth. Between using sneaky plays-on-words, and dressing himself in women's clothing (including a Lana Turner-style sweater), Bugs manages to escape unscathed, while Daffy repeatedly has his beak blown off, upside-down, or sideways, by Elmer Fudd.

Like "Rabbit Fire" and "Duck! Rabbit, Duck!", all scenes of Daffy getting blasted by Elmer's shotgun were edited when aired on ABC, CBS, the syndicated and Fox network versions of The Merrie Melodies Show, and The WB. While ABC and WB replaced the actual shots of Elmer firing at Daffy's head with a still shot of Bugs Bunny looking off-screen (or, in the case of the end of "Rabbit Seasoning", freeze-framed on the shot of the cabin when Elmer and Daffy go inside) and had the audio play normally, CBS and WB spliced out any and all scenes (both visual and audio) of Daffy getting shot.[1]

Bugs: It's true, Doc; I'm a rabbit alright. Would you like to shoot me now or wait 'til you get home?

Bugs: You keep outta this! He doesn't have to shoot you now!

Daffy: He does so have to shoot me now! [to Elmer] I demand that you shoot me now! [Elmer raises his gun. As Daffy sticks his tongue out at Bugs, he is shot. Daffy walks back over to Bugs, gunsmoke pouring out of his nostrils. He walks over to Bugs]. Let's run through that again.

Bugs: Okay. [deadpan] Would you like to shoot me now or wait till you get home.

Bugs: [as before] You keep outta this, he doesn't have to shoot you now.

After another series of gags and tricks, the cartoon ends as Daffy exposes Bugs' attempt at distracting Elmer by cross-dressing, and Bugs asks Elmer if he would like to "shoot him here, or wait 'til you get home." Daffy, catching the argument before it starts (but missing the "him" referring to himself), tells Elmer to wait until he gets home, and the two peacefully walk through the forest to Elmer's lodge. One gunshot later, Daffy storms out the door back to Bugs, re-aligns his beak, and says his signature line: "You're dethpicable". 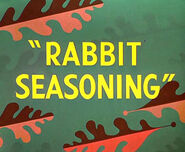 Unrestored Title Card
Add a photo to this gallery

Retrieved from "https://looneytunes.fandom.com/wiki/Rabbit_Seasoning?oldid=202684"
Community content is available under CC-BY-SA unless otherwise noted.