Bugs Bunny, looking for a place to pass the night, happens on an abandoned farm house, which, unbeknownst to Bugs, is the hideout of two gangsters, Rocky and Hugo. After claiming, "Huh! Sounds like Inner Sanctum!" while opening the squeaky front door, he drills a hole in the ground and sleeps. Shortly thereafter, Rocky and Hugo return after being pursued by rival gangsters. Bugs comically gets up in the middle of the firing session to use the bathroom, and returns to bed just as the gunfight ends.

That night, while Rocky is doling out his and Hugo's money, Bugs slyly cuts in after noticing Rocky isn't paying attention. He poses as several gang members until he gets all of their money. Rocky now wises up, and demands the money. Bugs refuses, even suntanning under the light he focuses on him. But when Rocky then demands Bugs for the money again, and when Bugs refuses again, Rocky threatens him with a gun, causing Bugs to randomly spouts out incomprehensibly at top speed. Rocky, annoyed at this, has Hugo take Bugs for a ride, which he gladly accepts, claiming, "I could use a breath of fresh air!" As Hugo takes Bugs for a ride, Bugs suggests that they stop by for a hamburger.

Bugs returns to the house without Hugo, and Rocky at first doesn't notice. When he does, he threatens Bugs continuously (all the while demanding that he help him get dressed). He demands to know where the "dough" is, and after promising not to look (since Bugs doesn't want him to know where he hid it) gets a bowl of pie-dough in the face.

Bugs then poses as Mugsy, another gangster (flipping a coin like George Raft, complete with his Brooklynite accent), who threatens and fulfills a promise to give him curtains {"Aw, they're adorable", Rocky purrs}. Bugs then pretends to be the police, and has Rocky hide inside a chest while he "deals with" the police. In faux pas, Bugs acts out the police breaking in, demanding to know Rocky's whereabouts, a fight ensuing over the chest which he is in, and Bugs eventually throwing the cop out the window. Sometime during the phony fight, Bugs had placed a time bomb inside the chest (advising Rocky to "hold me watch"), and it now promptly blows up.

Rocky asks which direction the cops went, and after Bugs points the way, flees the house, not wanting to be left "with that crazy rabbit!" Bugs sighs while imitating Rocky, "Some guys just can't take it, see? Nyah, nyah, nyah, nyah!" 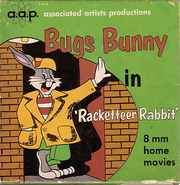 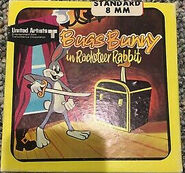 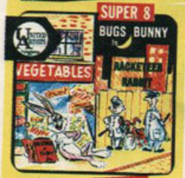 The short is also included on later pressings of The Golden Age of Looney Tunes: Vol. 1 after "Bugs Bunny Nips the Nips" was pulled due to complaints of racially offensive stereotypes. 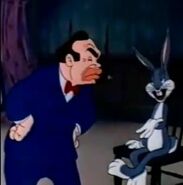 This scene was edited when shown on The WB! 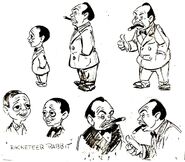